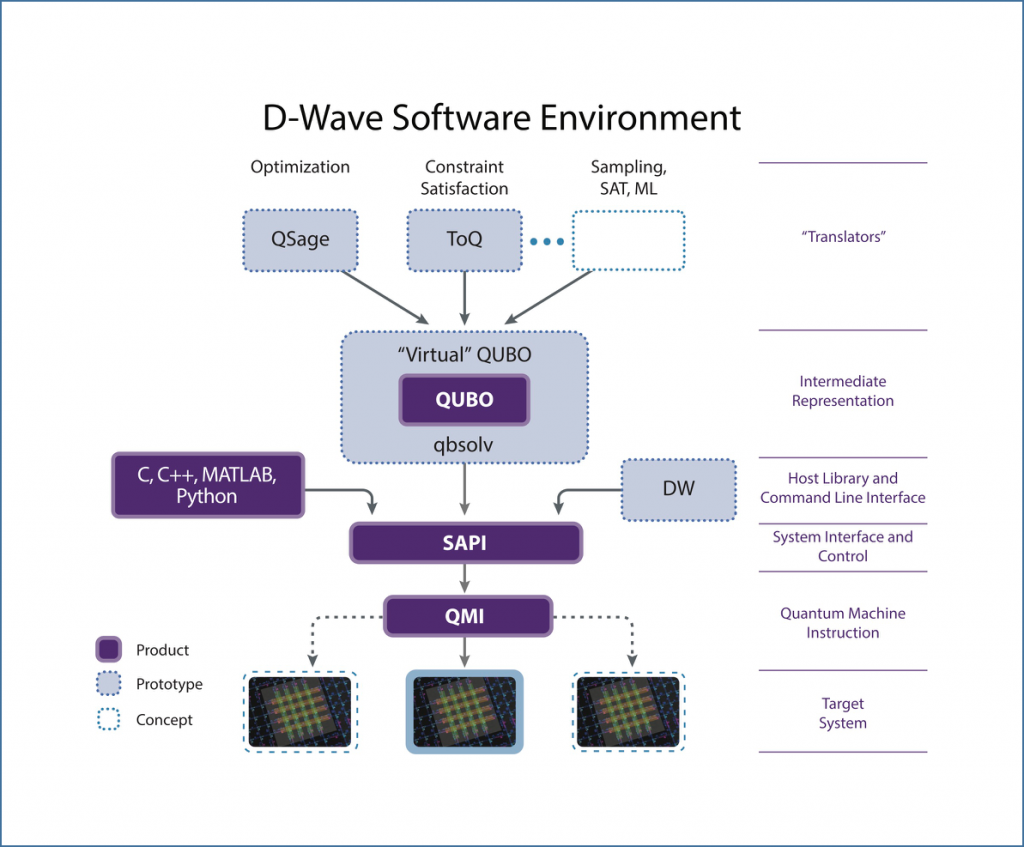 Burnaby, BC – January 11, 2017 – D-Wave Systems Inc., the leader in the development and delivery of quantum computing systems and software, has released an open-source, quantum software tool as part of its strategic initiative to build and foster a quantum software development ecosystem. The new tool, qbsolv, enables developers to build higher-level tools and applications leveraging the quantum computing power of systems provided by D-Wave, without the need to understand the complex physics of quantum computers. The promise of qbsolv and quantum acceleration is to enable faster solutions to larger and more complex problems. Users given early access to qbsolv have validated its benefits, and started to develop and release new software tools and applications building on it.

Qbsolv is used to solve large optimization problems, useful in a wide range of important applications. Qbsolv handles large problems by automatically breaking them down into smaller segments that can run individually on D-Wave’s quantum processor, then combining the individual answers into one overall solution. To date, users have shown that qbsolv enables solution of problems up to twenty times larger than could be solved on a D-Wave processor without using qbsolv. As the power of the D-Wave system continues to increase, the size of the individual problem segments will increase, allowing solution of even larger problems in less time.  Qbsolv, along with a technical white paper, is available now on GitHub, the online software repository, at github.com/dwavesystems/qbsolv.

Users given early access to qbsolv have already validated its use in several domains, including:

D-Wave’s release of qbsolv adds to a growing software ecosystem that enables application developers to use D-Wave’s quantum systems more quickly and easily.  Quantum software companies such as 1QBit, QC Ware and QxBranch as well as users of D-Wave’s systems are building tools and applications. D-Wave often works with these diverse groups to foster development of software that is both useful and effectively leverages quantum resources.

“Just as a software ecosystem helped to create the immense computing industry that exists today, building a quantum computing industry will require software accessible to the developer community,” said Bo Ewald, president, D-Wave International Inc. “D-Wave is building a set of software tools that will allow developers to use their subject-matter expertise to build tools and applications that are relevant to their business or mission. By making our tools open source, we expand the community of people working to solve meaningful problems using quantum computers.”

The quantum applications developer community includes noteworthy players such as Fred Glover, the inventor of the tabu search solver. “Qbsolv opens a world of possibility for developers,” said Glover. “Quantum applications are a new frontier and we’re just beginning to scratch the surface of what can be accomplished. We are looking forward to implementing new hybrid quantum/classical algorithms working with D-Wave’s qbsolv developers.”

Scott Pakin, a computer scientist at Los Alamos National Laboratory, has built a quantum macro assembler, available on GitHub, that leverages qbsolv to create programs that would otherwise be too large to implement on the D-Wave system. Other prominent national labs are also using qbsolv to develop quantum computing frameworks that they hope to open source.

In order to encourage widespread use of the tool, qbsolv is designed to ingest a quadratic unconstrained binary optimization (QUBO) format that is familiar and accessible to application developers. The QUBO form has been used with classical computing to solve many different kinds of problems. As an example, in one clinical trial an application developed in QUBO form was successful in predicting epileptic seizures 20-40 minutes in advance of their occurrence. Another study using the QUBO form explored grouping machines and parts together in a flexible manufacturing system in order to facilitate economies in time and cost.